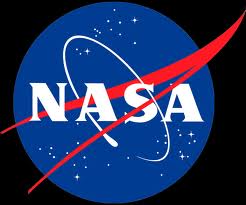 It is easy to witness the total and complete destruction of an institution like NASA at the hands of the warmist crowd. They are quite willing to destroy it's reputation while they cypher through ridiculous claims regarding the Arctic Ice Sheet and content. They have impugned the NASA credibility to such a degree as to wonder if they really do know what it is they are doing.

A few months back, NASA astronauts, engineers and other experts requested that NASA put an end to those nefarious warmist claims but that has been just ignored as they once again filter through some rare temperature example to make more ridiculous claims about the Arctic sea ice situation.


How often do you dry it really on top of Greenland? It was suddenly relevant to know this week how NASA could report on a record area from which the Greenland ice melting in July. Actually, it thaw completely to the top of the ice cap.

DMI since 1991 - with interruptions - had a functioning weather station in Summit, research station on the ice peak.

At the beginning of the week NASA announced a study showing that the area from which the top of the Greenland ice cap is melting took a sharp jump in a few days in July 2012. In fact, almost jumped area from 40% to 97% over the four days from 8 to 12 July.

We decided to find out how often it really is a thaw of Greenland's peak is located on the ice at 3200 meters altitude. Climatological Peter Riddersholm Wang threw himself into the fray.

"There have been periods where the weather station, for one reason or another have not been operational, but the measurements nevertheless provides a clear picture of how unusual in July 2012 was," says climatologist. 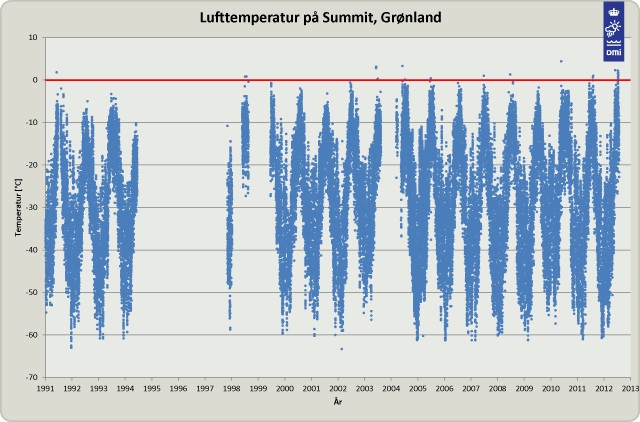 Observed air temperature from station 04415 and 04416 Summit, Greenland in the period 1991-2012. Data References are listed at the bottom of the news. Graphics Peter Riddersholm Wang.

"The figure shows that the temperature roughly once a year get above freezing during one or two measurements of the Summit. But in mid-July this year, we have thus successive measurements, which is well above freezing," says Peter Riddersholm Wang.

The highest temperature measured at the Summit, was a single measurement of 4.4 ° C, 24 May 2010. Both three hours before and three hours post-recorded freezing weather station.