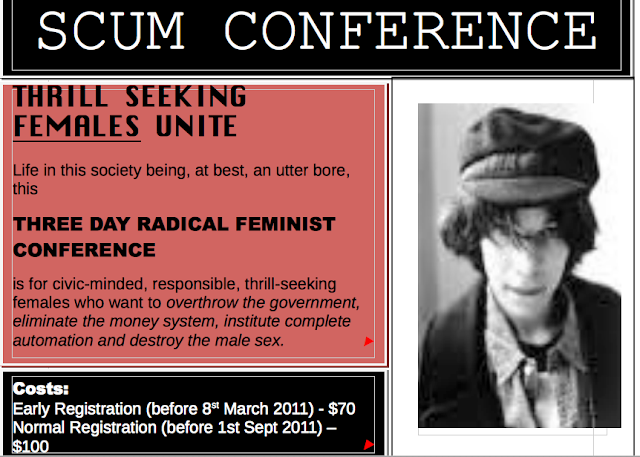 Again, another example of the bias and hate, these lesbians have for one half of the population. These are the same females who screamed and yelled for equal opportunity, wanted to get rd of discrimination and sexism and here they are doing exactly what they claim they were against.

Another prime example of the hypocrisy these nasty and obnoxious human beings indulge in. Have a look at the RAD FEM HUB blog (exposing their obnoxious behaviour) for further information regarding their long term plan. Check out the Scum Manifesto, that they want to enact and achieve (The destruction of men and boys). While you are at it have a look at the connection between the Australian Government, Prime Minister Gillard, her female Ministers and see the bias and corruption they are involved in.

Here is another example on how sexist and discriminatory they are by having a "Knitting" fair that excludes half the population. Watch how the female Sex Dicrimination Commissioner will just ignore their blatant sexist action but will jump onto anything any male does, assumed or otherwise. It truly is a disgrace.

Separatist cultures are usually sad and limiting, but I support the right of people to decide their own company.
What I don’t understand is how many forms of such discrimination are illegal, but a few select others seem beyond the criticism of the censorious class:

(Thanks to reader Brook.)