Julian Assange is the most annoying and arrogant person in the whole world. 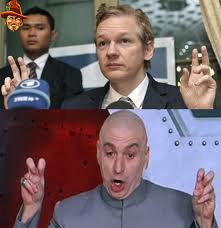 Assange is in deep and way over his head. To make matter ever worse, the self deluded elitist has opted to become a member of the Communist dictators admiration squad in Ecuador. It is akin to signing a pact with the devil. It may even be worse.
Considering that Assange does have some questions to answer regarding shagging those two sheilas(sl. aussie for women) in Sweden, a country that is run by the feminasties and are determined to thrown him into prison, based solely on his genitalia. The fascinating thing about all this is that the "so called" countries legal system is quite happy to accept the claim of these two feminists as gospel, no witnesses or prove required.

Which is quite interesting as it is a studied and proven fact that the girls are known to tell the odd fib or three. Actually they do that a lot, in order to save the feelings of others apparently. But Assange's feelings here apparently have no significance or relevance at all, as they accept the claims that he raped the two women, when all he did was dip his stick without a condom on, stupid I know but hardly worth spending a few years in the slammer over, in my opinion. It all came about when the two girls found out about each other and that was only the beginning. They probably thought they were the one to snare this sucker.

Personally, I think that Assange is just a twat or a twot (take your pick), suffering from some self delusional do gooder ideals, having exposed information that will be responsible for people's deaths.

Assange and his group of left wing lunatics are just like the rest of their ilk. They are ten years behind common sense and always claim that they are doing the right thing regardless of the harm or the deaths it may cause. Same as the Ethanol disaster(destroying food) as well as the DDT con job, which has caused the death of millions, but that's ok because it makes them feel better.
They rationalise it with some inbuilt justification factor, an ability that fails to comprehend any common sense at all. So people die, so what - but they saved the planet from, you know, erm...something...But it is the way it is.

Julian Assange is an arrogant so-and-so, isn’t he, ensconced in the Ecuadorian embassy, no doubt entertaining himself with self-flattering fantasies about being the internet age’s Carlos the Jackal. I wonder how he got to be so cocksure? It’s probably because for much of the past three years he was treated by liberal opinion-formers and vast swathes of the international media as a Mother Teresa-like spectral saint of the computer age, as the sole possessor of The Truth about everything in the whole world. Assange’s self-encampment in the Ecuadorian embassy and point-blank refusal to answer allegations made against him are infuriating some liberal observers. But for the source of his supreme cockiness, they should look close to home – for it was their embarrassingly teenage fawning over Assange that imbued him with that self-possession that borders on superciliousness.

Aside from a few saddos who have managed to peel themselves away from Warcraft long enough to wave “Free Julian!” placards outside the Ecuadorian embassy, there aren’t many Assange fans left in Britain. It is now de rigueur to sneer at the white-haired Wikileaks weirdo and to wonder: how did he come to be such an enormous and annoying twit? I know the answer to this question! It’s because before his crazily effusive supporters in the world of journalism decided to turn against him, he was flattered to within an inch of his life, elevated by the international media from a computer-bound spouter of conspiracy theories (which is all he ever was, and remains) to what New Yorker magazine called a “rail-thin being who has rocketed to earth to deliver humanity some hidden truth”. I mean, just listen to what Nick Davies of the Guardian once said to Assange: “We are going to put you on the moral high ground, so high that you’ll need an oxygen mask.” And they did – not just the Guardian but loads of serious publications, and just about every activist on the Left, all of them pushing Assange farther and farther up the mountain of morality so that not only did he need an oxygen mask, but he also no longer needed to explain himself or his actions to us mere mortals down below, including the Swedish authorities.

The liberal set’s beatification of Julian Assange reached stratospheric levels of stupidity in recent years. A fanboy book on Wikileaks by Guardian journalists Luke Harding and David Leigh said Assange was “like Jason Bourne”, and then went further and said he was a mix of “Mother Teresa and Nelson Mandela”. He is “brave, uncompromising and dangerous”, they said, as part of the Guardian’s mission to “put [him] on the moral high ground”. Time magazine made him a runner-up in the 2010 Person of the Year Award. He was held up as an otherworldly creature capable only of speaking the truth, in particular by the Holy Trinity of international publications that initially published his revealed wisdoms: the Guardian, the New York Times and Der Spiegel. When Assange found himself being slated by American officials, who said they would quite like to feel his collar, an American journalist said we were witnessing “the persecution of truth itself”. The notion that Assange was some kind of Messianic embodiment of truth was taken to its logical conclusion by one conspiracy-theory website, which said: “Just like Jesus of Nazareth, Julian Assange had a mission to reveal the truth. Now, just like Jesus, he faces persecution and/or death on false and trumped-up charges.”

You know what? When people compare you to Jesus, Mother Teresa, Nelson Mandela and Jason Bourne, when Time magazine bows down before you, when the entire Left does the secular equivalent of giving you a Magdalene-style foot-rub, when the Guardian’s best-known reporter promises to “put you on the moral highground, so high”, you are going to turn into a twat. It’s just inevitable. Treat someone like a Messiah and they will behave like one: all-powerful and invincible and never deigning to speak to mere men of the law or other worldly pursuits. And thus was a conspiracy theorist from Down Under turned by an educated cheering mob into a modern-day Moses. Assange is an annoyance of the liberal media’s making.